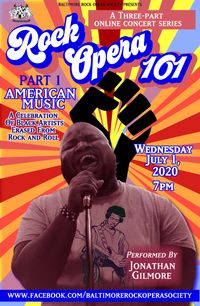 Over the course of three live-streamed concerts, a stage of jaw-droppingly talented local musicians and singers led by Gilmore will give high-energy performances of a variety of songs from the Black musicians who created American music, leading up to the birth of rock opera and taking the audience into the future of the genre. African rhythms, blues, jazz, gospel, bluegrass, country, R&B, rock n' roll, concept albums, and musical theater classics will be featured. We’ll discuss the roots of American music in the Black community and explore how the evolution of the craft led to and continues to influence rock musical theater.

The first installment, titled American Music, streams live on July 1st, just in time for our country’s birthday. Gilmore will lead us through a visual and musical inspection of important questions like “Who owns American music? Who owns rock and roll? How did the erasure of black people from its history take place?”

On Thursday, August 13th - Onto the Stage, will delve into the creation of rock musical theater and its influences.

On Thursday, September 10th - Into The Future will examine current trends and extrapolate a future for rock musical theater. We look at contributions from LGBTQ creators, Latinx creators, and other non-White groups who are finding their voice in rock opera.

We hope that you will accompany us on this journey through rock history! Check out the shows on the BROS Facebook page – www.facebook.com/baltimorerockoperasociety.